When hardly anyone is in the office, why not turn the meeting table into your desk?

And even if he hadn’t been the local head of the company formerly called DocuTap, it wasn’t like there wasn’t anyone suggesting otherwise.

“I’ve been coming here every day since day one,” Blosl said of the March 2020 COVID-19 pandemic shutdown. “When this first happened, downtown became like a ghost town. We have four floors, millions of devices, so it was just weird.”

He’s beginning to count more company now at the downtown office at The Plaza at Ninth Street and Phillips Avenue. But thanks to a hybrid, flexible layout, it falls far short of the estimated 225 employees in the Sioux Falls area.

“It was definitely an evolution in terms of the balance between smart and secure, business needs and people’s desires,” Blosl said. “I feel like we’ve slowly made progress. We definitely changed our operating model dramatically after the pandemic. We are much more of a virtual company now.”

Other mid-to-large employers are finding the same thing — particularly those with corporate headquarters or significant out-of-state offices.

After months, even years of essentially being remote, they’re slowly returning to the office this spring, trying to figure out what that’s like.

The Marsh McLennan Agency office in Sioux Falls recognized that returning to work could be a challenge for some employees who had been absent from work for two years.

So, in preparation for a hybrid return to the office in March, the team organized a return-to-work event before everyone was officially due back later in the month.

It was a way to “drop by, set up his workspace so that when they walked in, it felt like home,” said office manager Tracy Wheeler.

“We tried to create some excitement about our return with breakfast and lunch and happy hour and we made these ‘welcome back to the office’ signs. Some people we hadn’t seen in two years.” 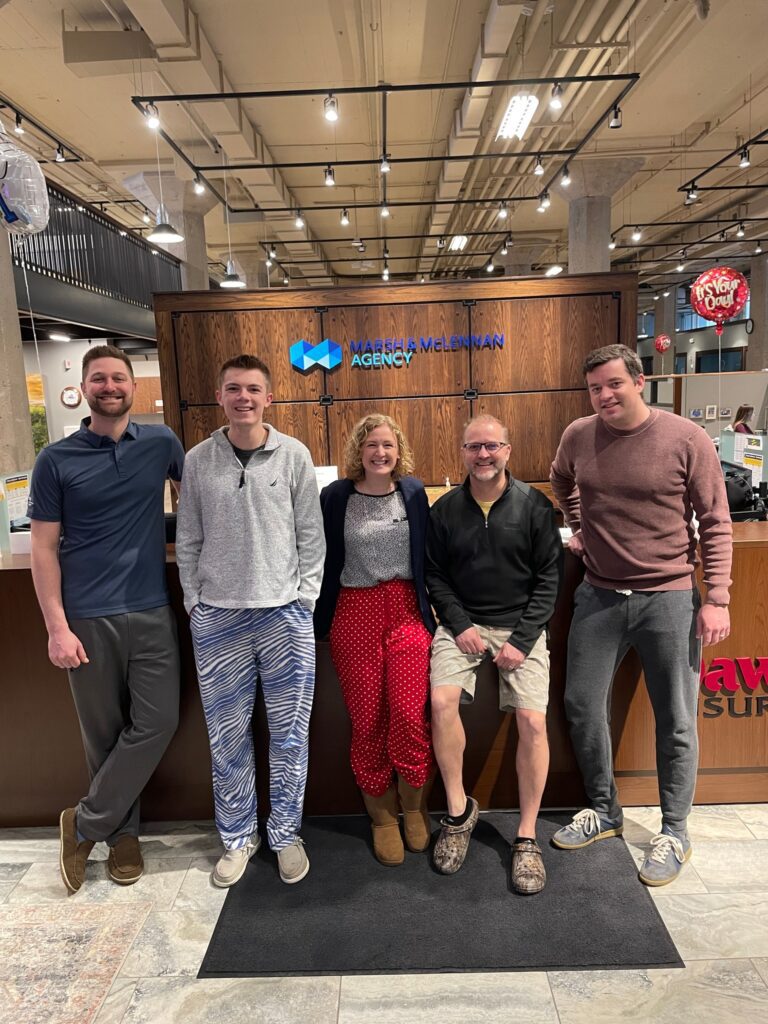 To celebrate the end of all-home working, the team came to the office dressed for Zoom calls.

While figuring out a new routine was emotional and an adjustment for some, “it was nice to hear the laughter and all the talking around the office,” said Jamie Baker, head of human resources. “And we’ve heard from more than one colleague who said, ‘I didn’t realize how much my mental health needed this.’ They didn’t realize what they were missing.”

The Sioux Falls office requires most employees to spend three days of their choice per week in the office, including a Monday or Friday.

“We’ve really gotten our culture team involved to try and promote this, what can we do to make it successful, and I think it’s great,” Wheeler said. “We see people going out to lunch, we have some new baby announcements and weddings, and everyone just feels reconnected.” 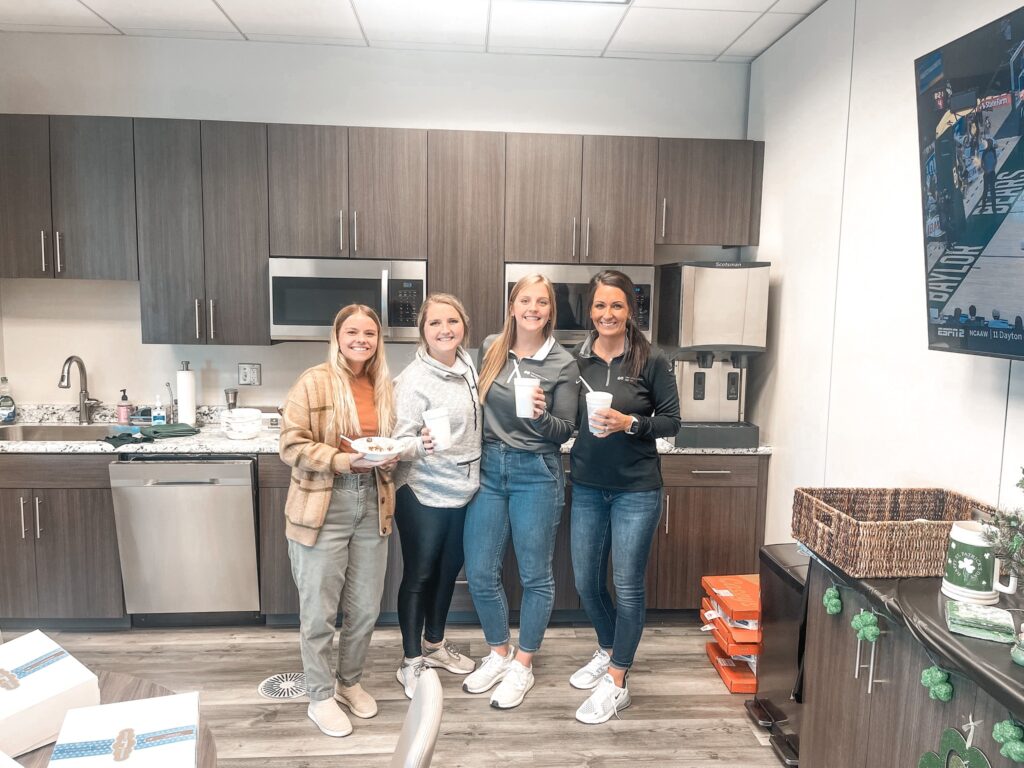 At any given time, more than 60 people are in the office, with Wednesday being the busiest, they said. Each person has their own desk – about 90 in total.

While the office had hired some foreign staff during the pandemic, particularly in specialized roles, the focus is on hiring local staff. But even those who don’t live in the area will be coming for a full week, Wheeler said.

“So I feel like we’re still working with them, and we’re doing our best to make sure remote workers feel included and part of the office.”

At Wells Fargo, which employs more than 2,000 people in Sioux Falls, most began returning in a flexible, hybrid arrangement in mid-March, although voluntary returns were possible earlier depending on role and immunization status. In most cases, employees have to spend three days in the office.

“We strongly believe in the benefits of seeing our colleagues regularly,” Chief Operating Officer Scott Powell wrote in a letter to all employees.

“It will help each of us cultivate stronger relationships, support coaching in the moment, identify career opportunities and generate new ideas. Ultimately, when we work together, we can better serve our customers and communities.”

At Citi, vaccinated workers at all US locations, including Sioux Falls, began returning March 21. They were asked to be in the office two days a week, with the flexibility to work from home up to three days a week.

Other employers in the area have found that much of their work can and will be done remotely for the foreseeable future.

At Experity, “we’re very flexible,” Blosl said. “We’ve heard from the employee base that while they’re enjoying their colleagues and working together post-COVID, they’re also enjoying the flexibility that a hybrid model offers, so we’ve recognized that and are making adjustments to our office. ” 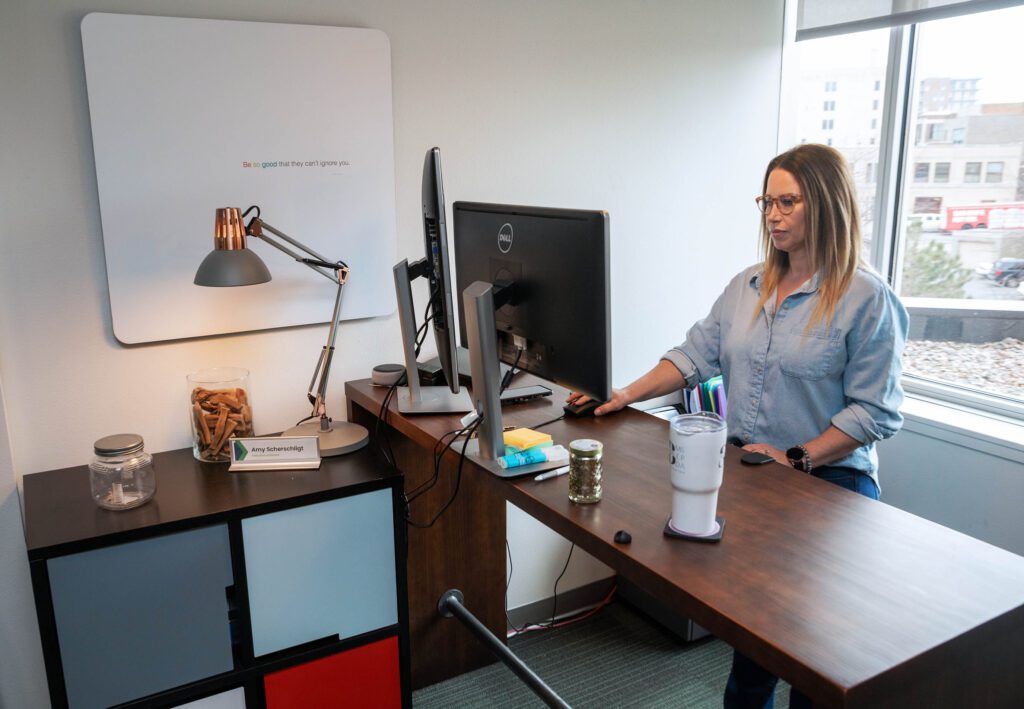 This includes adding “hotel space” for drop-in or casual workers and more space for groups like conference rooms. The company’s offices previously spanned five floors of the building. That was consolidated to less than two floors.

“I think we’re the right size with the hybrid model,” said Blosl. “A lot of people could be in here on any given day, or it could just be me.”

He estimates the number of employees at 200, with an average of around 50 in the office on any given day. Sometimes teams meet to discuss or work on a project. The company provides a budget for out-of-state travel-related collaboration. 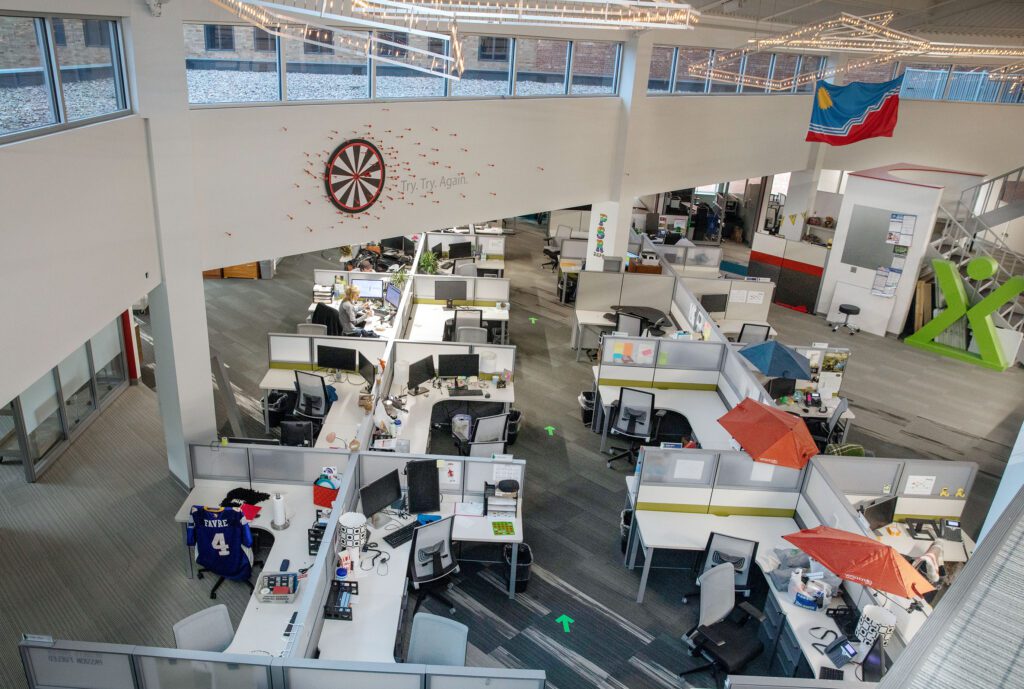 “Our data shows that our business is growing just as it was before, and now we’re accommodating a little more to what people want,” said Blosl.

“In terms of creating a workplace that would attract top talent, it absolutely helped. At the point where we’ve gotten to Experity, we’re competing for talent that can go to Google or Facebook or all these others that have been very flexible…so it’s definitely helpful from a hiring perspective.”

At Daktronics, the 2,000 employees are a mix of manufacturing workers who have to work on site and a range of other functions in sales and service, design and administration. 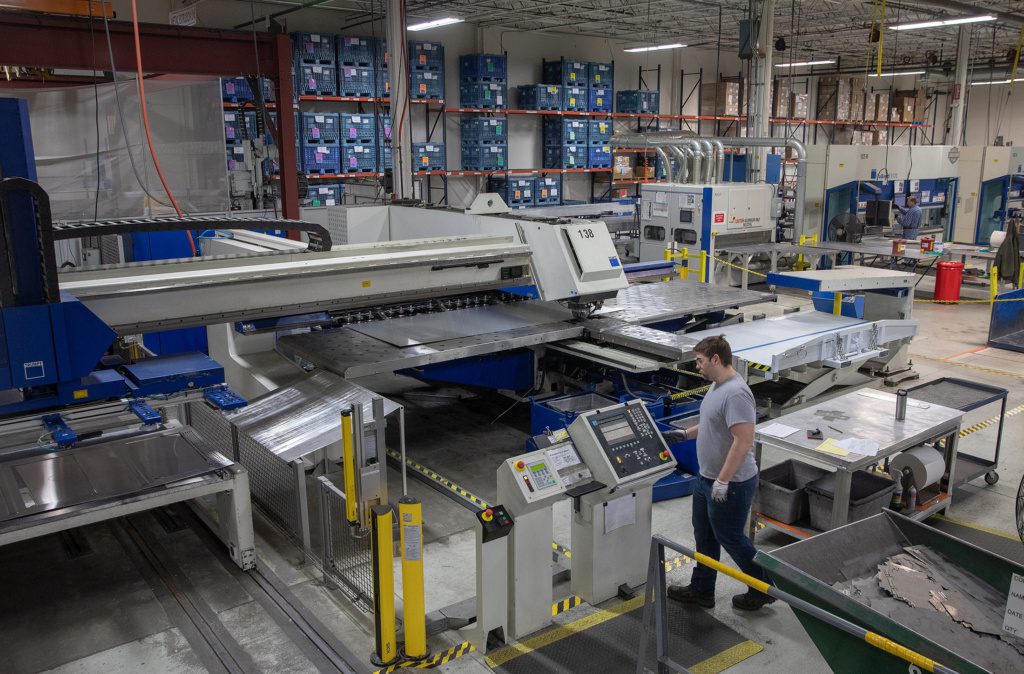 Those workers make up more than half of the company and had already started working from home before the pandemic, said Carla Gatzke, vice president of human resources.

“We’ve had a few people who, for various reasons … found that working from home wasn’t working for them, and we immediately adapted to that and figured out how we could help them be successful on campus, just like.” our people in production.”

Now that workplaces are more open, “we’ve left that to choice, and we’re finding that most people, almost everyone, prefer to continue working from home,” Gatzke said. “But the campuses are open, the workspaces are ready for people. And people come by for work when it makes sense for them personally, or occasionally teams say let’s work on campus today.” 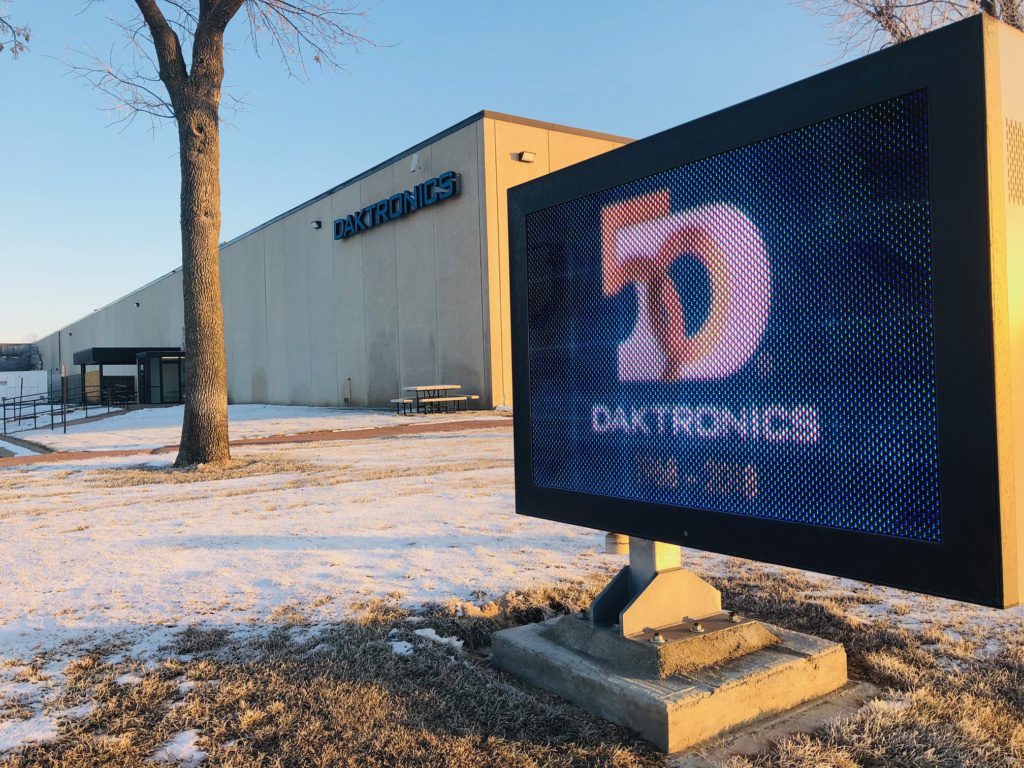 Workers said “they feel a lot more productive working from home because they don’t have to commute, pack a lunch or do all those activities,” she continued. “And we’ve found that our leaders are more intent on building a more social aspect into our regular activities, creating and sponsoring events that bring people together personally.”

In some cases, former office space would be repurposed for production, she added.

And the added flexibility is helping the Brookings-based company attract more out-of-town employees.

“Part of the reason we had more members of our team working at home before the pandemic was because we had more people in Sioux Falls who preferred to live in Sioux Falls and work at Daktronics,” Gatzke said. “We really see our industry coming back and that’s why we’re advertising (to workers) on billboards in Sioux Falls.”