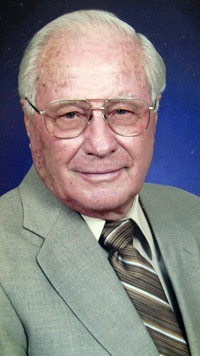 Daniel (Danny) was born in Denver, Colorado to German-Russian parents who fled Russia in 1913. He was another American success story, rising out of poverty to excel in his career, achieving financial security and enjoying great fortune.

He was the youngest of six children growing up in the midst of the Great Depression. He, like his siblings, was denied a full education as he had to find a job to support the family. As a young man he was interested in machining and manufacturing. Before World War II he worked for a jeweler for a while. During the war he worked as an apprentice machinist at a busy and dangerous Denver rail yard overhauling locomotives in support of the war effort. There he became a journeyman. It was also there that he was first exposed to hazardous chemicals, toxic fumes, and loud noises that eventually led to interstitial lung disease and hearing loss, which he suffered much later in life.

Danny was a teenager when he met his future wife, Nona Kimbrell, while skating at a roller rink in Derby, Colorado. They became great skate dancers. They married in 1947 and had a son, Dennis, before moving to Los Alamos in 1951 to work at the Los Alamos Scientific Laboratory (now Los Alamos National Laboratory). In Los Alamos they had two more sons, Kenneth and Edward. Until his retirement in 1986, he worked for the laboratory as a foreman in machining, foreman in the machine shop and foreman in welding. During his laboratory career he received several awards for his innovative ideas for welded metal components.

In retirement, he and Nona enjoyed 21 years of road trips in their RV around the US and Canada. During these wonderful years they were frequently accompanied by his beloved sister Mary and her husband Simon Hancock. They traveled together, visited relatives, celebrated holidays, went camping, fished, played cards and dominoes, and lived life to the fullest.

Danny and Nona loved to dance. Country and western swing were their favorite styles, and they attended the local dances. They also competed in bowling leagues.

Danny had busy hands and always had a house project going on, mixing concrete, making his own drains, repairing clocks, making jewelry, fixing a neighbor’s broken stuff and so on. When he was at home, he was usually in his garage workshop.

Those things ended when Nona suffered a stroke in 2007. Danny became a loving full-time carer until her death on October 4, 2016.

Danny was a beloved neighbor and friend to many, often serving as their handyman. He had an amazing repertoire of practical skills. As he struggled with lung damage, hearing loss and arthritis of late, he was lovingly watched over by the same neighbors and friends, as well as his dedicated caregiver, Angie Padilla. He is greatly missed by everyone.

The day before his death he had a joyful final reunion with his sister Mary. It meant so much to both of them.

Danny was preceded in death by his parents Carl and Catherine; wife, Nona; son Edward; and his siblings Carl, Lydia, Molly and David.

He is survived by his sister Mary (age 100); sons, Kenneth and Dennis; two daughters-in-law, Karen and Deborah; two grandchildren, Jesse and wife Kassandra, David and wife Lauren; seven great-grandchildren; and his nieces and nephews.

At a later date, to be determined, there will be a celebration of life for Danny.