Once an abandoned building in Rochester’s Plymouth Exchange, Gandhi House has been restored to house an urban farming project, including a garden and this chicken coop built in 2015 by University of Rochester freshman volunteers. From left are Tian Lan from Shanghai, China; Galen Everett of Fairport, New York; Xuefan Hu from Shanghai, China; and Mackenzie Lee of Boise, Idaho. (Photo University of Rochester / J. Adam Window)

As the MK Gandhi Institute for Nonviolence enters its fourth decade, its leaders continue to look to the future to ease the pains of the past and present.

“Part of our mission is to prioritize programs for youth ages 12-24,” said Gwen Olton ’04, interim executive director of the institute. “We teach them how to grow vegetables in our garden, how to cook and sew, and how to reuse and recycle clothes.”

And teaching them to build a world where nonviolence is the norm—no easy task in a city besieged by violence. The institute, which is affiliated with the University of Rochester, hosts programs for Rochester City School District students that focus on conflict transformation and workshops that emphasize de-escalation practices.

“Young people are often less bogged down in conflict situations than adults,” explains Olton. “They are more open and receptive to nonviolence and more flexible in practicing new skills. We do this to honor the future of our city community and create a world that works for everyone.”

“Nonviolence isn’t just about stopping and objecting to what we don’t like, it’s actively building the future we want.”
– Gwen Olton ’04, interim director of the Gandhi Institute

Kit Miller was Executive Director from 2009 to 2021 and now serves as Director Emeritus. She is proud that the institute offers “a place of beauty, learning and safety that has been visited by thousands of people since 2012”. And she says that focusing on youth has been part of the institute’s mission since she first started working there.

“People in this age group make decisions that affect their entire lives,” says Miller. “They are also heavily affected by negative cultural influences. We want to inspire youth to be their best selves.”

Rochester graduate at the helm

The institute was founded in 1991 in Memphis, Tennessee, before moving to the River Campus in 2007 as an affiliate of the university. But his home for the past 10 years has been a 19th-century colonial building in the Plymouth-Exchange neighborhood across the Genesee River from the River Campus. 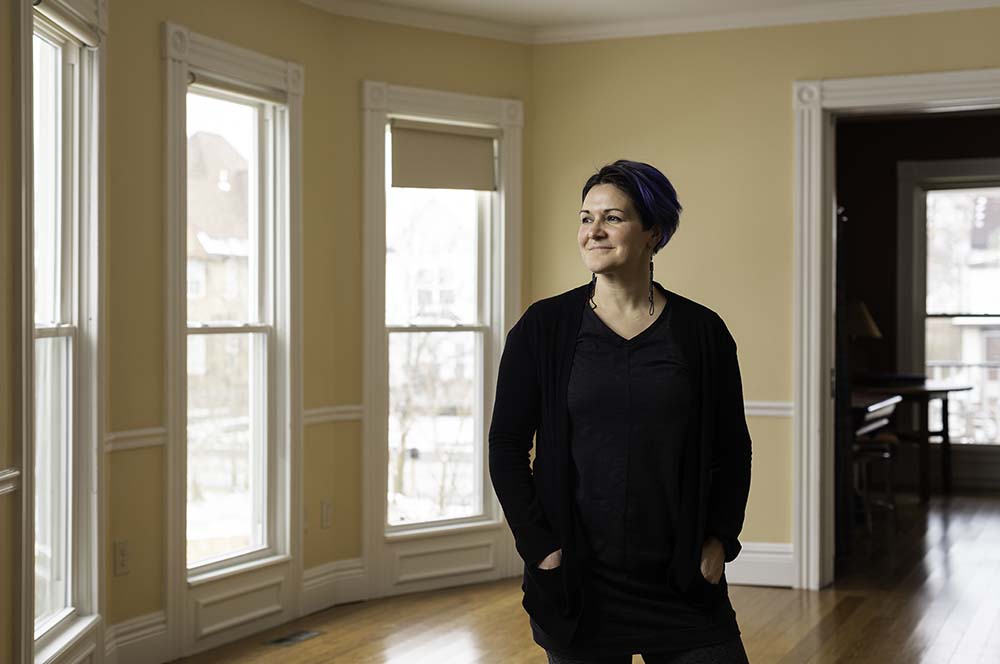 Gwen Olton, Interim Director of the Gandhi Institute, pictured at the Gandhi House in December 2021. Olton studied philosophy and environmental sciences in Rochester and graduated in 2004. (University of Rochester photo/J. Adam Window)

“The institute is closely linked to the university, but remains a separate organization,” says Olton. “The university has continued to provide financial support to our operations, and we have remained a resource for the university for workshops, conflict support, restorative practices and dialogue, and other requests.”

The nonprofit organization’s mission is to empower people to use nonviolence to create a sustainable and just world for all in collaboration with local organizations, academic institutions, students and dedicated peacemakers.

Olton says Rochester students have been “a phenomenal source of support” by volunteering in his nearly an acre garden, which includes everything from potatoes and tomatoes to cucumbers and wildflowers. There are also numerous apple and pear trees in the countryside. This year, the institute launched a community garden model, where neighbors and community members can adopt a bed and take food from the garden.

Olton grew up in Palmyra, New York, just outside of Rochester, and graduated from university with degrees in philosophy and earth and environmental sciences. She worked two years as a Care Coordinator and one year as a Complex Care Manager for the Office of Mental Health at Hillside Children’s Center before spending five years as a Counselor and Training and Practice Conversion Manager at Coordinated Care Services. She joined the Institute in 2020 as Director of Education and Training. Olton says taking on the year-long role of interim executive director was a no-brainer last July.

“Having the opportunity to do this type of work full-time—and to do it with others who are as committed to nonviolence as I am—was an easy decision,” she says. “As someone who grew up with a lot of conflicts in my family, I had to deal with different people from an early age. I had an interest in conflict and nonviolence, and one of the reasons I chose Rochester was that it offered the opportunity to take a nonviolence course as a freshman.”

“I don’t think a single organization has the solution”

Olton says racial incidents across the country and ongoing violence in the city of Rochester represent challenging times for an organization committed to nonviolence. “I don’t think a single organization has the solution,” she says. “We have a diversity of ideas and strategies that we believe will help, and we’re seeing more collaboration among those of us who are genuinely committed to building a community we love.”

A podcast project is in the works to share stories from community members who have found success in de-escalation and nonviolent work. “We get so used to hearing what’s not working,” says Olton. “We want to turn the script around. There are many tools out there. It takes imagination and vision. Nonviolence isn’t just about stopping and objecting to what we don’t like, it’s actively building the future we want.”

That future includes expanding current programs and building relationships with those formerly incarcerated. Staff are working with prisoners in Attica and Groveland providing tips on practicing nonviolence in turbulent situations, and Olton wants to expand this effort to other prisons and increase de-escalation work and support.

“I hope the videos will reach young audiences and help us advance our mission: to help individuals and communities develop the inner resources and practical skills needed to achieve a nonviolent, sustainable, and just world.” , says Olton.