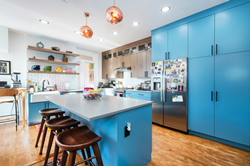 Upon completion of this Upper West Side apartment remodel, the entire space featured a much more open floor plan, as well as bright and colorful finishes. The homeowner was more than thrilled with the result.

An Upper West Side resident recently completed work on a magazine-worthy renovation project at 420 Riverside Drive in Manhattan. The homeowner had been saving for her dream home for years, and when she finally found it, she hired MyHome Design + Remodeling to get everything exactly how she wanted.

Due to the apartment’s location in a beautiful pre-war building, it was important to the homeowner and design team to preserve as many of the original features as possible. Through a unique remodeling process using renovation technology programs, the apartment design has been brought to life. Using Chief Architect, a state-of-the-art design program, MyHome was able to create renderings for the homeowner during the planning phase that showed what the finished home would look like at the end of the remodeling process.

In addition to the unique bespoke tiles in several of the remodeled spaces, designer Justin Schlenger used a preferred lighting brand, Brizo, in a Luxe Steel finish. Cambria countertops were installed in the kitchen in the color “Carrick” with a matte finish, a cool shade of gray. This complemented the upper cabinets, which are solid maple doors with a soft moose stain, and the base cabinets, where Schlenger Sherwin Williams chose Georgian Revival Blue. The homeowner allowed the MyHome team to select the appliances, which were all GE stainless appliances.

The highlight of the new open kitchen floor plan at 420 Riverside Drive was a door added on the adjacent dining room wall to access an office and second bedroom. Schlenger ordered a reclaimed wood barn door with matte black hinges from Rustica Hardware. The door frame was painted Sherwin Williams Georgian Revival Blue to match the lower kitchen cabinets and tie the two spaces together.

Every conversion project brings its own challenges. In this case it was the floor covering. The homeowner wanted to keep the existing flooring, and the build team found that there were two levels of flooring after one of the walls was removed. Also, the flooring in the room where the walls collapsed ran in a different direction. Schlenger found a solution to remove the flooring from one room and replace it so that all flooring went in the same direction and also added a low wooden saddle to even out the height transition.

Upon completion of this Upper West Side apartment remodel, the entire space featured a much more open floor plan, as well as bright and colorful finishes. The homeowner was more than thrilled with the result.

“As I was writing my reviews, I almost cried thinking about what we did and what an amazing experience it really was. We really took a space from something that had potential into something quite remarkable. I look around often and can’t believe it. I had some anxious moments during the process, but most of all I found it interesting and exciting to see how it all unfolded.”

MyHome was founded in 2001. The company has a team of consultants, designers and managers. The MyHome New York City kitchen and bathroom showroom is located at 353 West 48th Street in Manhattan. MyHome offers free design consultations for Manhattan homeowners that can be booked at https://special.myhomeus.com/consulting/.

Share the article on social media or via email: