After spending some time with Samsung’s larger foldable phone, the Galaxy Z Fold 4, I’ve spent the last few weeks with its smaller (and much more affordable) brother, the Galaxy Z Flip 4.

As the name suggests, this phone is a phone with the main screen folded inwards. So you can flip it open to use it, although there’s a small screen for messages and alerts on the outside. As such, it’s pretty much a throwback to the flip phones of yesteryear, but with lots of added features. It certainly stands out from other phones on the market.

Measuring 3.34 x 2.83 x 0.67 inches (HWD) when folded and weighing 6.45 ounces, the basic design hasn’t changed much from last year’s Galaxy Z Flip 3; It just seems a little flatter and more pocket-friendly, but slightly heavier. It’s thicker than a typical smartphone, but also smaller, and that works well in some situations.

When you open the Flip 4, you’ll see a 6.7-inch 120Hz OLED panel with a resolution of 2,640 x 1,080 pixels. That’s a bit taller and thinner than what you’ll find on most phones today (it has a 22:9 aspect ratio). It worked well for things like scrolling webpages or checking email, although it’s not that great for gaming. The screen itself is a very bright AMOLED panel that typically has an adaptive refresh rate of up to 120Hz, although you can set it to a fixed 60Hz for better battery life. I found the screen very easy to read, even in very bright light. Samsung says the main screen’s glass is stronger than last year’s model, although I haven’t really been able to test that. You can see the crease if you look for it, but it’s so subtle you just forget it’s there.

When closed, you’re looking at a 1.9-inch, 512 x 250 pixel front display that gives you the time, date and battery status, along with some messages, including calendar updates (depending on the program you’re using; this wasn’t the case). doesn’t work for me with the Outlook calendar). You can easily swipe through your notifications. The idea is that you can do some basic things with the phone closed. In practice, however, I almost always had the device open to do something.

The camera system is good but basic for a phone in this category. It has a 12-megapixel f/1.8 main camera with optical image stabilization and a 12-megapixel f/2.2 ultra-wide camera on the outside. I found these took pretty good photos, and the Photos app has all the basic features you would expect. They can record video in up to UHD (4K) at 60fps, but default to FHD 30fps and include some video stabilization and autofocus features. Again, I found this worked well, although it doesn’t quite match the features you’ll find on the higher-end flagship phones. The camera feature I missed the most is a zoom lens, which you’ll find on the cheaper Galaxy S22.

A cutout of the main screen houses a 10-megapixel f/2.4 camera for selfies. Photos with this camera were a bit darker than today’s best smartphone cameras, but it’s still good enough for things like video calls. Likewise, the sound quality was good, not great.

When it comes to video conferencing, one nice thing about the design is that you can use it in what Samsung calls “flex mode,” where the camera base is flat and the top is open in an “L” shape, so it’s very stable and You can angle the phone to get the best angle of the video.

On the specs page, it has a Snapdragon 8+ Gen 1 processor with 8GB of RAM and my device came with 128GB of storage. (Models have up to 512GB of storage.) It packs a 3,700mAh battery that supports 25W charging or 15W wireless charging. I found it easily lasted all day.

With Samsung’s X65 modem, I got very good 5G coverage where 5G was available, similar to what I’ve seen with the Fold 4 or the S22 Ultra. As always, it depends on the carrier and location – I’ve had pretty good results with T-Mobile in New York and some parts of the suburbs, but there are still areas of limited 5G coverage with all carriers. 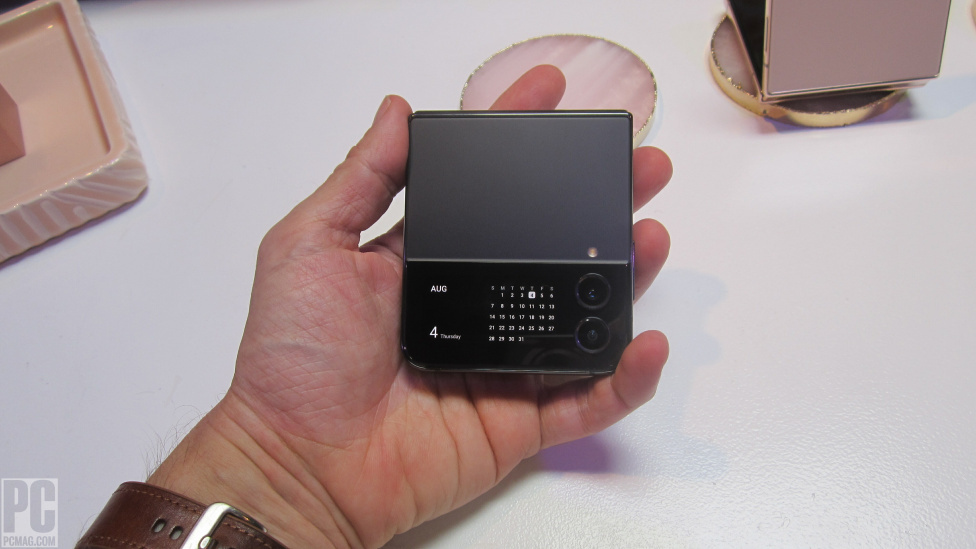 On the right side of the phone is a volume rocker and a power button that doubles as a physical fingerprint sensor. I found that worked well, although you can also set up the phone with features like Face Unlock. Like most high-end phones today, it lacks a headphone jack.

Recommended by our editors

The Flip 4 comes with Android 12 and Samsung’s One UI 4.1.1 skin, which includes some multitasking capabilities (although in practice I find multitasking works best with larger displays, like on the Fold).

Unlike the higher-end Galaxy phones, it doesn’t support DeX, which lets you connect an external display and keyboard, a feature I find useful on occasion. And unlike the S22 Ultra and Fold 4, it doesn’t support using Samsung’s S Pen stylus. Still, these are niche features and not typical of most phones in this class.

The model I tested came in an eye-catching ‘Bora Purple’, and the Flip 4 is available in a variety of other colors as well. I used it without a case as there isn’t that much screen to worry about although cases are of course available. As with the basic flip design, the slightly unusual colors help the phone look really different from other phones.

With a list price of $999, the Galaxy Flip 4 is competitive with the middle of the flagship phone range. For that, you might lose a bit in camera, but you gain a stylish, interesting design that really catches the eye.

Sign up for Fully mobilized Newsletter to get our top mobile technology stories straight to your inbox.

This newsletter may contain advertisements, offers or affiliate links. By subscribing to a newsletter, you agree to our Terms of Use and Privacy Policy. You can unsubscribe from the newsletter at any time.