Union Minister for Rural Development and Panchayati Raj Shri Giriraj Singh said today that any violence against women should not be seen through the prism of religion and should be firmly condemned by all without prejudice. The month-long campaign titled “Nai Chetna-Pahal Badlav Ki” with the theme “Elimination of Gender Based Violence” will be carried out as “Jan Andolan” (People’s Movement) in all states/UTs of the country 25th November to 23approx December 2022.

This will be an annual campaign, focusing on specific gender issues each year. The main theme of this year’s campaign is gender-based violence. This campaign will be conducted by all states in collaboration with CSO partners and will be actively pursued by all levels including state, district and bloc, engaging community institutions along with the wider community. The campaign will also bring together all line departments and stakeholders to make a concerted effort to recognize, identify and address issues of violence. Over the years, this campaign will incorporate an intersectional approach, deepening understanding of gender and generating relevance and ownership across departments and industries with a multi-sectoral approach. As part of the campaign there will be knowledge workshops, leadership training, seminars on sexual violence and redress mechanisms.

Shri Singh said Prime Minister Narendra Modi spoke about gender equality and the importance of honoring women in daily life in this year’s Independence Day speech. Shri Modi said: “A distortion has crept into our behavior and we sometimes insult women. It is important to abolish all speech and behavior that belittles the dignity of women.” 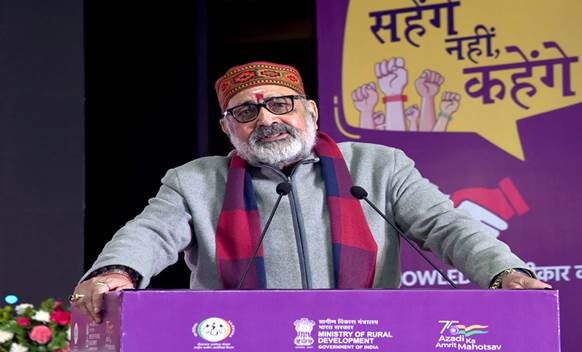 Shri Singh said the Prime Minister is taking all steps to empower women and said only Atmanirbhar women would help to make an Atmanirbhar Bharat. Shri Singh praised the progress of the DAY NRLM mission saying in 2014 there were 2.35 crore SHG members but after Modi’s active support over the past 8 years the number of SHG members has now grown to around 9 crore . He said the goal is to reach 10 billion members by 2024. The minister also informed that the cumulative loan to SHGs before 2014 was about Rs 80,000 and now the bank account over the past 8 years over NPA 5.7 crore of only 2.1%.

Shri Giriraj Singh said each beneficiary woman must save at least 1,000 rupees a year by selling local products. He said the day is not far off when some of the Lakhpati Didis will earn 10 lakhs rupees a year.

Shri Singh also opened 160 gender resource centers in 13 states, which he called “Naari Chetna Kendras”. It will work with WCD Ministry One Stop Centers (OSCs) dedicated to supporting women affected by violence in private and public spaces, in the family, in the community and in the workplace. Across the country, 1,251 gender resource centers have been set up where women who have been subjected to gender-based violence can seek help.

Sadhvi Niranjan Jyoti, Minister of State for the Union for Rural Development, said in her address that there was no concept of gender discrimination during the Upanishad era, saying that highly independent philosophers such as Gargi and Maitreya are examples of India’s women’s power. She said PM Modi’s “Beti Bachao, Beti Padhao” campaign has led to increased awareness and mass awareness of the prevalence of gender bias and the role of the community in eradicating it. In the past 8 years, the sex ratio at birth (SRB) has improved in many states including Haryana. Sadhvi Niranjan Jyoti said for India to maintain its position as a global growth leader, more concerted efforts at local, State and national levels that take a whole-of-government and whole-of-society approach are needed to put women on an equal footing with men. She said while increasing the representation of women in the Publicity is important and can potentially be reached through Affirmative Actions Attitude change is essential for women to be seen as equals in their homes and in their homes the wider society. This campaign is an attempt to bring about such a change of attitude in the world Thoughts of everyone involved, she added.

Union Rural Development and Steel Minister of State Shri Faggan Singh Kulaste, speaking via video conference, said it is a sad scenario in the country that large numbers of men and women still consider gender-based violence to be normal and need to have that perspective changed. He said women should come forward and speak out against any form of discrimination and there are ample legal remedies to challenge it. The minister said the campaign is aimed at rural women and will be implemented through self-help groups registered with the government.

Shri Nagendra Nath Sinha, secretary of the Ministry of Rural Development, said it was totally unacceptable that 30 percent of all married women aged 15 to 49 had been subjected to any form of violence and 45 percent considered it normal. Citing the NFHS-5 data, Shri Sinha said that up to 77% of women never sought help from anyone because of the violence inflicted on them, and this trend must be vigorously combated.

Shri Sinha said: Nai Chetna is a popular campaign initiated and mobilized by the central government and in which 30 state agencies will participate. He said the idea was to bring the issue of gender-based violence into focus and make women aware of their rights and mechanisms that are in place to address their grievances.

That may be remembered Gender-based Violence (GBV) is a global pandemic that affects 1 in 3 women in their lifetime. DAY-NRLM recognizes this social ill as a major obstacle to achieving individual and social development and therefore aims to take the necessary action to eliminate gender-based violence. As part of its ongoing efforts to mobilize and address issues facing marginalized communities and women, DAY-NRLM emphasizes the need to create institutional mechanisms to respond to gender issues, along with integrating gender across verticals for greater perspective shift.

DAY-NRLM has identified gender-based violence as the opening theme for its NAYI CHETNA campaign, launching a month-long intensive campaign from April 25th November, the International Day for the Elimination of Violence against Women. The initiative aims to build the capacity of women and the marginalized to recognize and acknowledge the different forms of violence they experience and to respond by speaking up, sharing and seeking support to take action against it to take action against injustice inflicted. 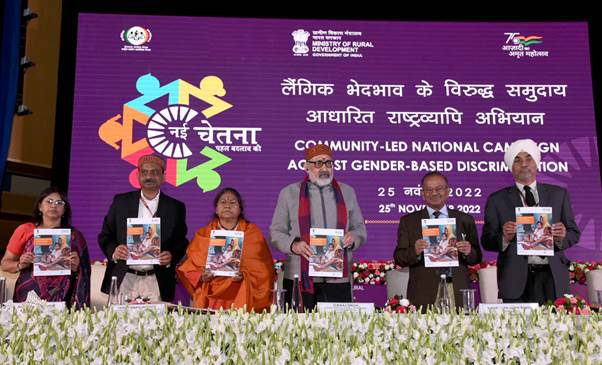 As part of its institutional empowerment efforts, DAY-NRLM established block-level Gender Resource Centers (GRC) to provide a community-managed platform from which to protest gender inequality and discrimination, and where victims or those harmed could do so seek remedial assistance from other departments and agencies working on these issues.