Stepping into Carmen Haid’s Marrakech home immerses you in a sunset palette of sahara brown, ocher and burnt red – the same tones that make up so much of the ancient city’s architecture. Haid, who pursued a career in fashion and worked with Yves Saint Laurent to manage his PR in the 1990s, spent a significant portion of the last year in the city taking the time to plan a new design project. Aside from lazy afternoons at the Riad Mena and Howell James and Vanessa Branson’s rooftop restaurant, El Fenn (which has become a clubhouse of sorts for stranded friends from London and Paris), she has focused on furnishing the house she bought as a shell three years ago . The first bespoke, monochromatic pieces – vases, bowls and tableware – are launched alongside vintage furniture as part of their resurgent Atelier Mayer label. The collection starts at £100 and will be available online from May.

Haid came to Marrakech for the first time 25 years ago. Like her old boss, she immediately fell in love with the idea of ​​owning her own home in the city and becoming part of the growing, diverse international cultural scene. “Marisa Berenson and Romeo Gigli have a home here, but also people like Daox, the co-founder of the Moga festival, and the arts activist Touria El Glaoui,” she says. “Marrakech has changed over the years and a new generation of dynamic businesses and artists is emerging. It has an unparalleled zest for life and creative enthusiasm.”

Haid’s creative endeavors are a big part of her legacy – Atelier Mayer was founded in Austria in the 1920s by her late grandmother Klaudia Mayer. Haid relaunched the brand as an online portal for selling luxury vintage fashion in 2007, years before circularity was a sustainability buzzword. “We expanded quickly, shipping to 104 countries,” says the Austrian-born entrepreneur, who splits her time between Marrakech, London and her family home in Paris. “I closed everything down in 2014 to refocus, so the new Atelier Mayer is broader and focused on lifestyle and interiors: there is a mix of vintage design pieces, bespoke work from our Marrakech studio and interior design services. Reusing and celebrating craftsmanship is at the core of the brand philosophy and it’s what I still do. Everything is transported in fully recyclable packaging and new items are made to order so there is never overproduction.” Haid believes her line is exceptional curation. “Anyone can come to Marrakech and go shopping,” she continues. “But I edit a special collection that shows craftsmanship.”

The patterns of pottery and weaving are all important in Moroccan handicrafts – they tell stories.”

While her launch next month is all monochromatic, she has already envisioned future collections where she will bring color to the range. Everyone is informed by different regions of the country: Fez, for example, is known for its Ottoman influence and shades of green. “The patterns of pottery and weaving are all important in Moroccan handicrafts,” explains Haid. “They tell stories and I find the provenance fascinating.”

Some of Haids objects have already found a place in their home that they would like to open up to paying guests. “They draw very heavily on the work of the Vienna Secessionists, a group of Austrian artists around the turn of the 20th century that included Gustav Klimt, Otto Wagner, Josef Hoffmann and Koloman Moser,” she says of the simple, graphic silhouettes (see also “Collecting: The miracle of the Wiener Werkstätte”). “I like their modernity, the materials and clean lines, but mix in the futurism of 1960s fashion.”

There’s more than a touch of retrofuturism to her home, especially in the upstairs lounge, sort of North African Piano noble, inspired by Pierre Cardin’s bulbous house, Le Palais Bulles, remodeled by architect Antti Lovag in the early 1990s. The room’s curved lines, clad in polished terracotta tadelakt plasterwork, are accented by a huge Sputnik-style chandelier. It is a barbara Moment.

Most of the rooms in the house have a loose theme based on key pieces Haid has sourced from markets in Marrakech and abroad. Woven textiles and exaggerated draping set the calm tone in their African- and Indian-inspired bedroom suites, while bold bursts of color bring other bedrooms to life. The interior doors were hand-painted throughout restaurateur from the Museum of Islamic Art in Marrakech. The main front door is the exception: an intricately carved wooden monolith salvaged from India that had to be sunk in concrete to fit the façade.

Elsewhere, modernism feeds into Haid’s eclectic aesthetic. Her huge bespoke dining table is surrounded by split-cane chairs inspired by Pierre Jeanneret’s classic designs for Chandigarh in the 1950s, which she also commissioned. A vintage drinks cart, originally from the historic Hotel La Mamounia, can be pulled out for poolside refreshments. The modernist references are clearer in her office, where two Le Corbusier chaise longues and a pair of Josef Hoffmann Thonet chairs are married to pieces of Bauhaus furniture and a huge 1920s desk originally made for an airport in Kenya. The look is loosened up by accessories: ceramics, various black and white baskets by Atelier Mayer, and vases and candle holders by designer Lara Bohinc, who is a friend of Haid’s.

The most time-consuming part of the new house project and product launch was also the most enjoyable: finding and forging relationships with various manufacturers. There is a transparency about crafts in modern Morocco on a scale unimaginable for big fashion brands. Beni Rugs, for example, recently opened a showroom just a short drive away (Haid is planning a future collaboration); Visitors will see dozens of women at looms in his studio. The finished products are washed and dried in the courtyard, appearing like graphic artworks on a piece of Marfa, and there’s a bar in the attached showroom. It has to be a highlight of any sightseeing tour — next to Saint Laurent’s Majorelle Gardens, of course. 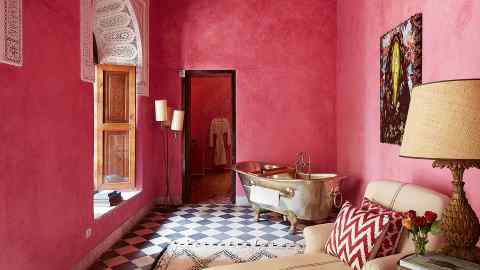 For this reason, Haid’s revitalized Atelier Mayer is as much about experience as it is about design. Those staying in-house will find chef-designed menus that include fresh, organic produce and Moroccan wines. Each bathroom features beauty products made from natural, hand-harvested ingredients from local manufacturer Botanica, and there is a masseuse on hand if extra pampering is desired. Her attention to detail extends to a collaboration with Marrakshi Life, who designed the house’s staff uniforms, and a showroom set within the peaceful grounds with flower beds punctuated by cacti, orange trees, geraniums, lemon verbena and bright blue agaves. The idea? Once you’ve lived the lifestyle, you can order everything from hand-embroidered cushions to modular jute sofas – or hire Atelier Mayer to completely redesign your own home.